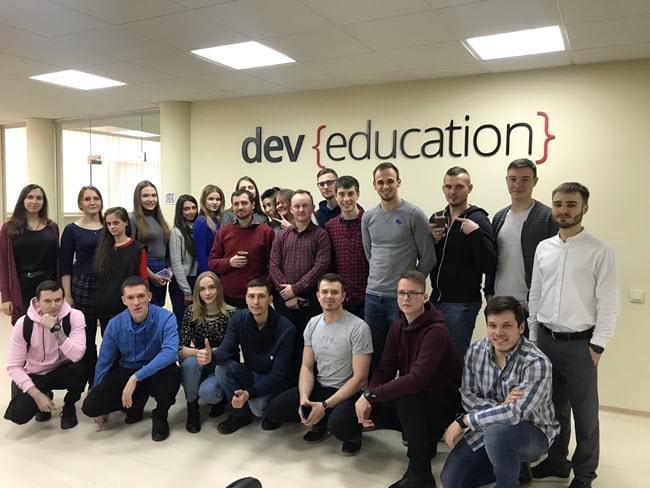 On Friday, December 13 (yes, on Friday, the 13th!) a ceremonial opening of the college of our partner DevEducation took place in Kharkiv, the second largest city in Ukraine in terms of size and population. And this is the third city in Ukraine, apart from Dnipro and Kyiv, where we teach students through DevEducation. Today, on December 16, DevEducation started its FrontEnd course, and at the beginning of the new year, its QA/AT course, which is still opened for enrollment.

“At the college in Kharkiv, we will test a new, five-day model of education,” says Dmytro Medvediev, director of DevEducation Kharkiv and FrontEnd teacher. “Since each college student is awarded a grant from the college IT partner companies in the amount of 85% of the tuition fee, it is important for us to provide students with both knowledge and practice, and give them experience working in project teams so that after graduation all graduates can have successfull interviews for a developer job in an IT company.”

To remind, we have a partnership agreement with DevEducation, which implies that we hire successful college graduates. On Friday, a delegation from WizardsDev headquarters “landed” in Kharkov. College business curators, heads of WebApp and CRM WizardsDev business units, Oleksandr Povietkin and Oleksandr Ivanov, told the students about the basic principles of our company – drive, respect and communication, what developer and tester jobs involve and how they differ, and noted that both categories of specialties are in equal demand, “The main thing is that IT is your passion. And which is yours, you’ll find out very soon.”

Students were also instructed by the directors of Kyiv college, Oleksandr Pred (personally), and Dnipro college, Olena Chornovol (via videoconferencing). Oleksandr Pred told students the “success story of a guy” who heard about IT from a friend in a cafe (the story turned out to be his own), “We give an opportunity to learn a new speciality or improve the qualification and get a high-paying job in the shortest time. You’ve probably heard the saying, ‘It’s important to be in the right place at the right time to succeed.’ But more than that, the main thing is to be prepared for this.”

Olena Chornovol promised students sleepless nights and a lot of work, but noted that it is about raising a strong spirit and the willingness to change one’s life for the better.
This, of course, was not on purpose, but the college did open on Friday 13. Maybe because of this, or for some other reason, exactly at the beginning of the ceremonial opening, the lights went out in the entire multi-storey building of the business center where DevEducation is based. As we’ve coped even with bigger challenges, it took the craftsmen from WizardsDev three minutes to start the backup generator, and offline text and video presentations were prepared in advance and waited to be presented. Students and journalists of Ukrainian publications who were present at the opening ceremony appreciated our efficiency and competence in agile!

DevEducation is an international educational non-profit project created in 2017, whose purpose is to teach IT to maximum interested and inquisitive students around the world, giving them a chance to get a high-paying job in no time. Training is delivered on a full-time basis with a focus on practical tasks in project teams. The total number of the project graduates exceeded 500 people.